Today The Palace is a treasure trove of costumes for dancers of all kinds, offering everything from richly-beaded costumes to hip scarves and swords. The spacious, purpose-built dance studio hosts a full timetable of belly dance classes and provides rehearsal and practice space for hire. Owner, Ali Higson has been dancing for twenty five years and knows what dancers need!

It began with one belly dancer’s dream.   Amera had a vision of an Egyptian-style shop where Sydney’s six belly dancers could meet and make costumes. The first Palace opened in 1987, underneath the Newtown Lebanese nightclub where Amera performed. The club opened weekends, leaving weekdays free to run dance classes. 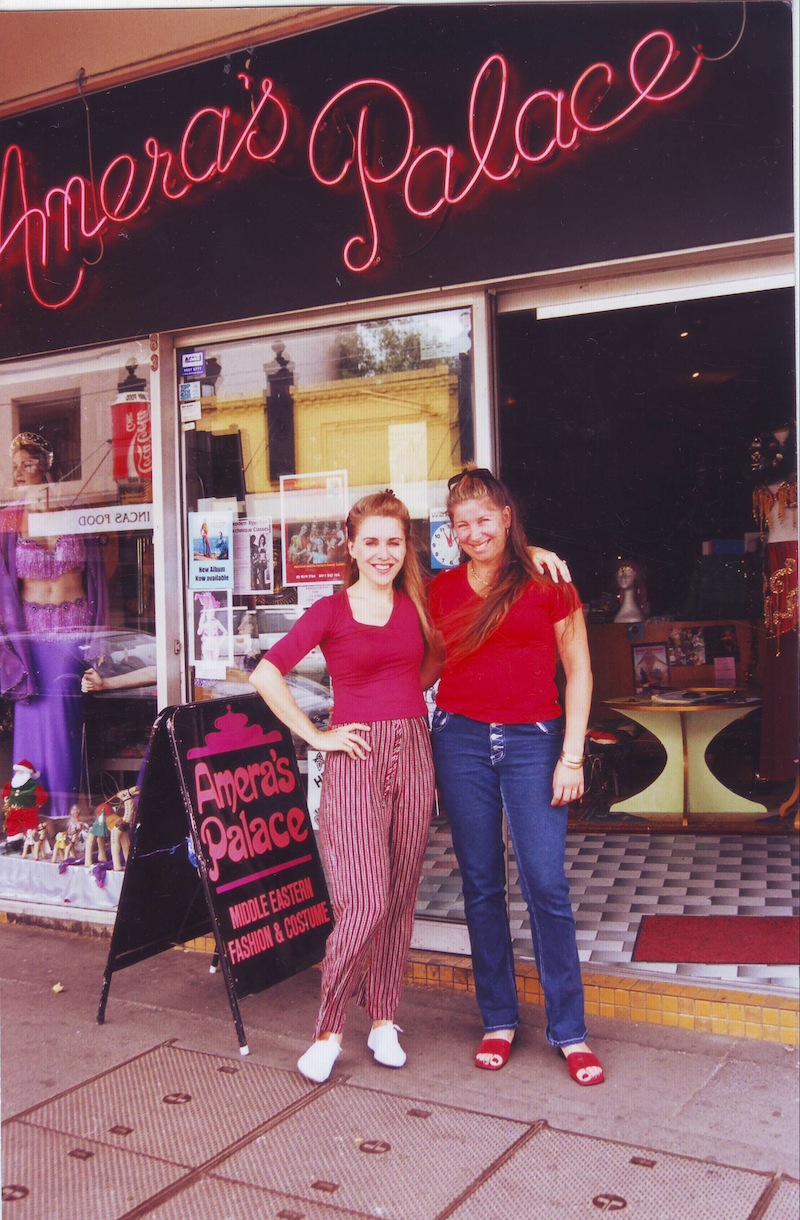 Amera, with Yasmina of Cairo, outside Amera’s Palace on Enmore Rd

“There was no formal way of teaching back then,” says Amera. She learnt belly dance the only way possible, through another dancer giving private tuition. “The teacher would just put on the music and say ‘follow me’,” she says. “Western dancers slowly formalised the techniques and gave them a vocabulary.”

A thriving belly dance scene soon grew around Amera’s Palace. It was a place dancers could get information, learn with overseas teachers and buy costumes. Amera and her friends hand-made costumes sitting on the floor of the shop, using sequins from the one and only bead shop in Sydney.

The Palace was Amera’s passion but her blossoming dance career meant performing in the Middle East regularly. Leonie Sukan ran the shop for six of those years, with Amera returning bearing new costumes, music and news from the growing Oriental dance world.  When the nightclub was closed Amera and Leonie moved to a shop on Enmore Rd, and as belly dance’s popularity grew, they split into two separate schools.

It was while travelling that Amera found her first Egyptian costume maker, Mahmoud el Gaffar, still a supplier today. It was Mahmoud who made the first hip scarf.

“When I brought them back, people went crazy,” says Amera. “Until then you just learnt with a piece of material tied around your hips, with the teachers in full costume.”

Amera’s Palace became the place for exotic costumes for performers of all kinds, welcoming customers such as Kylie Minogue, Shakira, Sass & Bide and Mardi Gras performers.

Amera was joined by Rita Nolan, in 2009, a business partner with a head for the practicalities of the business. In 2010 Amera’s Palace moved to its current spacious studio and shop in Marrickville.

In the tradition of belly dance, there is a direct line between Amera and the new custodian of the Palace, Ali Higson.  Amera gave Ali her first bellydancing job in a Bankstown nightclub. Ali went on to become an international street performer, combining belly dance and Arabic drumming with circus and cabaret skills. When Amera decided it was time to focus on her family, Ali was the perfect person to take over.

A lot has changed since the days before hip scarves. Fusion styles like Tribal belly dance have gained huge popularity and props such as fan veils and swords have been woven into the fabric of belly dance. Today Ali’s shop is filled with belly dance treasures those first dancers would only have dreamed of. But what most excites her is the way it will continue to change and grow.

“The Palace is a wonderful community of people, doing something they love,” says Ali. “I hope to build on that vibe, and nurture a space which is an intrinsic part of our student’s lives. A space where they can dance, play, get dressed up and get creative! Then anything is possible!!”

Who knows what will be the next chapter in The Palace story?

Due to staff shortages the Marrickville boutique will be closed on Saturday 15th January. Please call Ali 0411 387 188 to arrange an appointment Dismiss